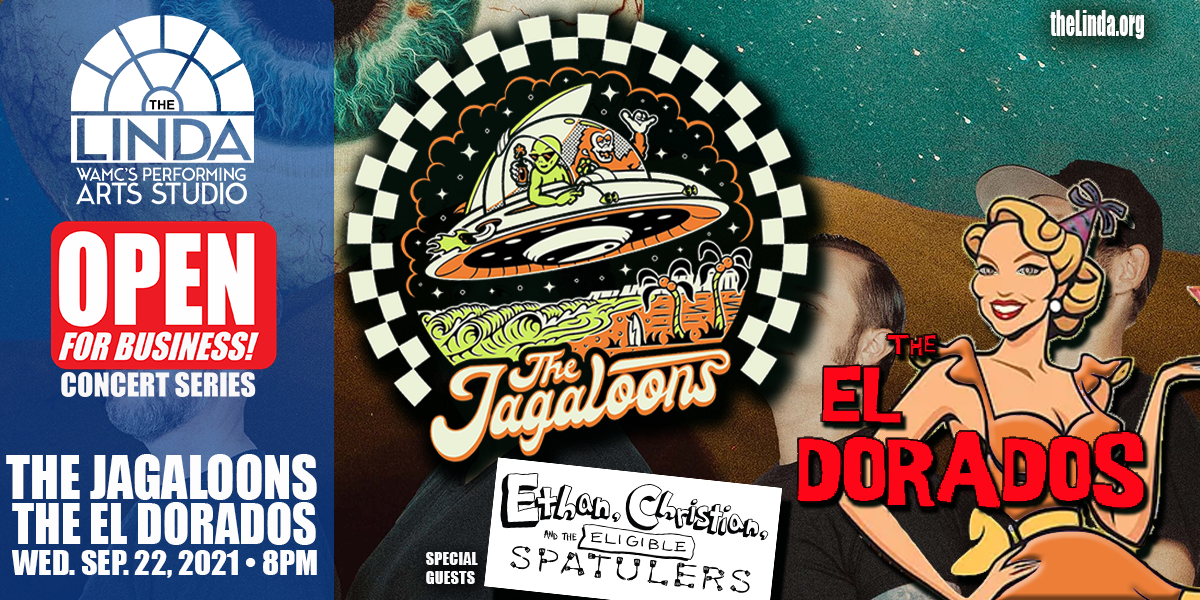 Hailing from Albany NY, The Jagaloons play guitar-driven, reverb-drenched, all-instrumental rock and roll. This quartet takes the surf music sound of the 1960s and adds modern and eclectic influences, creating a sound all of their own.

After releasing a couple of EPs themselves, the Jagaloons signed on with UK-based Sharawaji Records for their 2019 debut album “Ruin The Party”. The album has been very well received and has been featured on numerous radio stations across the globe. “Ruin the Party” was recently named #37 on the list of the top surf records on the 2010’s by stormsurgeofreverb.com.

Last December, The Jagaloons hit the studio to put a collection cover songs from their live set to “tape” with the idea of streaming one song per week on Bandcamp. Once all the songs were released, the entire album was made available for purchase both digitally and on CD. The album title, “Knock You Up”, and cover art are even an homage to The Ventures.

Since 2010 the El Dorados have been bringing old time rock and roll to the Capitol District. The band plays a collection of favorites that include hits from Buddy Holly, Elvis Presley, Roy Orbison and many more. In their travels, the El Dorados have had the opportunity to play the Empire Plaza, Saratoga music hall, Saratoga race track ‘Final Stretch’ festival, Revolution Hall and various venues in the Capital District. The band was formed by Paul Dorado whos unique vocal style carries the band to a time when cars were cooler and beer was cheap;) For more information about the El Dorados, please visit us on Facebook www.facebook.com/rockingeldorados for band updates and where to see us play. Cheers!

They are joined by Ethan, Christian, and the Eligible Spatulers

A comedy music duo featuring comedian Ethan Ullman (as heard on the Howard Stern Show, Kevin Allison’s RISK! Storytelling podcast, and Dave & Ethan’s 2000” Weird Al Podcast) as well as singer-songwriter and producer Christian Portwine. Their debut track “Petroleum Habit” has been praised and heard around the globe on the world-famous Dr. Demento Show.